Get Rid Of It!

If you’ve still got it – you haven’t made any money yet. 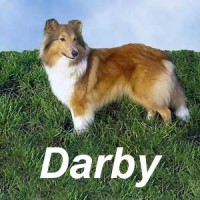 I’d like to share a story about my best friend, Darby. He had a great job as a Shepperd’s assistant where he managed a large herd of sheep . When the economy tanked and people stopped buying wool, the corporate office decided to cut costs. Darby got his pink slip and started his new job search, only to learn that his company was not the only one cutting costs.

Darby was never one to sit still for very long, so he decided to hire himself and begin the entrepreneurial journey that he had frequently dreamed about. But, what would be the best business he could build?

While taking a personal inventory of his skills and interests one day with a friend, he mixed up his favorite beverage to share during the conversation. It was a satisfying cold beverage that had evolved from the need for refreshment on the hot, dusty days he worked on the ranch. He had kept this treat to himself and a few close friends over the years, only sharing it on social occasions. His friend praised his concoction just as all the previous guests he had entertained and it dawned on him, that he had a potential product and a market.

Maybe he should start sharing and giving away his quietly kept talent to more people.

He brainstormed with his family and friends and came up with a brand name for his fabulous drink. He decided to call it K-9 Juice. His first test-market was a K-9 Juice stand outside his home and it met with immediate success and rave reviews from all the people traveling by his stand that stopped in to give it a try. His new customers started to spread the word throughout the neighborhood until he was busy every day making more of his K-9 Juice and selling it through his little stand. 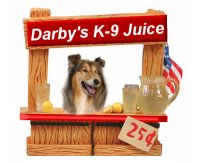 One day a little bird stopped by, tried some of his juice, and liked it so much that she started chirping about it to all of her friends and expanded the awareness of his juice beyond the borders of his little neighborhood. People began to travel to his stand and he had to enlarge it and hire a few helpers just to satisfy the demand for his product. He found ways to share his product with more little birds.

One day Darby got an idea to reward his loyal customers with a discount. He started a VIP club, issued a card to the members that entitled them to a free juice after every 10 juices that they purchased. He also met another enterprising friend that had a biscuit stand not too far from him. They decided to cross-promote each other by putting a small display of biscuits on the counter which increased his sales with a simple add-on choice of juice with a biscuit. His friend did the same thing by adding Darby’s juice to his stand.

Pretty soon, the friends decided to join together in a partnership where they now had two stands with increased revenues. As they were enjoying their success they began to study, analyze, and systemize their operations into an easy to duplicate business model. They learned through experience and advice from trusted counselors, how to manage their money and increase their margins putting more profit into their accounts. They were able to build more stands, hire more employees, and contribute to the communities that they were involved in.

He engaged in 5 specific repeating activities that lead to 3 different keys that each opened up opportunities to grow his business. Can you identify them?

They work for any kind of business whether you are providing a product, service, or knowledge. I call them the 3 keys to biz success. We’ll talk about them in my next WeeklySalesCall.